Every flu season — and especially during the dire ones, like 2017-18 — health officials shift into overdrive, imploring employers and schools to disinfect doorknobs, promoting extended hand washing with soap, among other preventive measures.

Yes, the influenza virus is spread via surfaces, but just as often, it’s spread through the air. So while sanitizing doorknobs and high-touch surfaces helps, containing this relentless and often deadly virus requires cleaning the air, too.

“Breathing, talking, coughing, and sneezing release influenza virus into air,” writes Werner Bischoff, author of a study conducted at Wake Forest University School of Medicine and published in The Journal of Infectious Diseases.

That’s right — merely breathing can send enough particles of flu virus airborne to infect anyone in the vicinity.

Bischoff’s team found that medical providers within 6 feet of infected patients can be exposed to infectious doses of the virus — even if patients are breathing normally, not hacking up a lung. That’s because the particles released via exhaling and talking are so small and light they can hover in the air indefinitely and travel significant distances.

Coughing and sneezing, by contrast, release large virus particles that typically sink in short order. Up to 89 percent of flu-carrying particles are of the small, nomadic variety, Bischoff’s team notes.

So even if every flu-infected person sneezed into a tissue and covered their mouths to cough — a pretty huge “if” — the virus would still wander freely. It’s not as if you can advise people to stop breathing.

As for hand washing, 70% admit they’ve bypassed the soap in public bathrooms, and most don’t wash for the recommended 20 seconds. One-third of adults concede they don’t even reliably wash up after using the restroom.

But even total hand washing compliance wouldn’t contain the flu. The virus only lives on human hands for 15 minutes, whereas virus particles can waft through the air for hours, even days.

What’s more, airborne flu particles have 8.8 times more flu virus than surface particles, a study in PLOS Pathogens found. And some flu patients are far more contagious than others. One study found that among hospital patients who released influenza into the air, 19% emitted up to 32 times more virus than other patients. There’s no way of identifying the extreme emitters walking and breathing among us.

If every flu patient wore a surgical mask — now, that would actually make a difference, according to the PLOS authors. But that’s hardly a containment strategy to rely on, especially since you can infect others with influenza a day before you even know you’re sick.

Vaccination, of course, is the best way to prevent flu epidemics, ideally immunizing folks from both surface and airborne virus particles. But even in a good year, vaccines only reduce the risk of contracting the flu by 40% to 60%, and they work better on certain strains of influenza than others. More than 30 strains of influenza A and B have been identified, and each year brings a new round of educated guessing, as the virus mutates rapidly.

“The virus has evolved to be a cunning vaccine-avoiding machine,” as one virus expert put it.

Not to mention that vaccination rates in the United States hover below 45% for adults and below 60% for children and vary wildly in Europe and on other continents.

What can be done?

Scientists are increasingly targeting the airborne spread of influenza and advancing the technologies, such as whole room disinfection methods, that can rid indoor air of influenza, norovirus and countless other pathogens.

A large body of scientific literature has emerged in recent years confirming that airborne spread of influenza is a significant threat — and that ignoring this mode of transmission is risky business.

As the Wake Forest authors noted, “Millions have lost their lives to influenza in pandemics, and epidemics of varying severity occur worldwide each year.”

The flu afflicts tens of millions annually and kills up to 650,000, according to estimates by the United States Centers for Disease Control and Prevention (CDC) and World Health Organization (WHO). And that’s in an average year.

“Another pandemic is inevitable, and it will most likely be influenza,” a WHO spokesman recently told the Express. “The only known pathogen that will cause a pandemic with certainty is influenza.”

The burden on the U.S. healthcare system is so great that that the CDC tracks influenza severity with a weekly surveillance report. In the United States alone, the flu causes employees to miss 17 million workdays, at a cost to employers of $7 billion a year. Each year brings tragic stories of young, healthy people stricken by the virus and hospitals overflowing with patients in the hallways.

As one emergency-room doctor put it in 2018, “I do not think that we can over hype this right now. I do not think there is a level of caution that I would consider too extreme.”

A crisis as dire and predictable as the flu requires all hands on deck and all prevention and containment strategies deployed. Vaccination, hand washing, and surface cleaning won’t suffice; it’s time to get serious, too, about disinfecting our indoor air and all high touch surfaces.

Whole Room Disinfection is the ability of a given disinfection technology to thoroughly reach all surfaces, nooks and crannies in a room or given space that it is intended to disinfect.

The industry measures efficacy on a logarithmic scale to show the relative number of microorganisms eliminated as a result of disinfection efforts. For every 1,000,000 microorganisms living in a room, let’s take a look at the impact of each logarithmic reduction.

Despite the best efforts of environmental staff, a significant amount of potentially dangerous pathogens remain after manual cleaning of a facility. The most commonly used approach to facility disinfection is spraying and wiping surfaces with bleach mixtures or quaternary ammonium (quats) . Time after time, studies indicate that, at best, less than 90% of the high-touch surfaces are sprayed and that the vast majority of surfaces in the room are overlooked. In addition, wiping increases the chances for cross contamination. Studies show that spray and wipe methods eliminate less than 50% of pathogens in any given environment. Furthermore, bleach mixtures emit noxious fumes that can be irritants to staff and the organisms these cleaning methods leave behind. 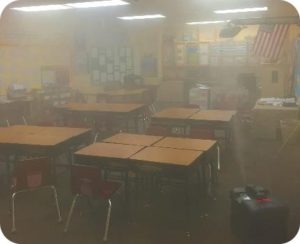 It’s no secret that public, high-traffic places have air and surfaces that…

When a hospital patient checks out of a room, cleaning staff swoop…

No matter how comprehensive a physical cleaning and disinfection regime is, it…

How clean are EMS Ambulances?

What parts of the Ambulance have higher ATP counts? After doing random…